Why is AR linking to numerous websites such as Facebook, Appnexus ?

Why is AR linking to numerous websites such as Facebook, Appnexus ?

I've been trying to resolve some of the major issues with Accountright for some time, from drop outs, slow access, sync errors and similar problems.  Most times when I, or others, express concerns of how slow the system is or access problems the standard response is it must be our internet connection, or the antivirus is interfering or the firewall, blah blah blah!

I've been monitoring Accountright online access for some time now and wish to point out some of the findings as well as query some findings that are of concern.

Firstly it should be noted that tests were done on 3 different computers at 2 different location using 2 different internet providers. IP Addresses change slightly with each connection but stay in the same range.

I noticed that AR hooks up to numerous online address but the predominant ones seem to be:

and a range of others.

The latency varies, and some almost double at times. The times are averages over a period.

The point is that the quickest connection is still nearly a 1/3 of a second which of course multiplied by the many back and forth connections required will cause significant speed and data transfer problems.

In my experience, Azure and AWS both run poorly in Australia, even though MS says its opening servers here it still won't be a big difference for AR. IMO.

I noticed too that AR doesn't hold the connection too long before it resets and hences has to reconnect on each query.

Also I'd like to query Appnexus, as I believe they are an online advertising company, and why a connection from AR to them is required.  Is information being passed to them?

The same goes with Facebook!  I do not have a facebook account, I never will, and definitely don't want them monitoring me! Again, what info is passed.

Its almost amusing to note that we have a quicker connection to the advertising and tracking company than what we have to our data! 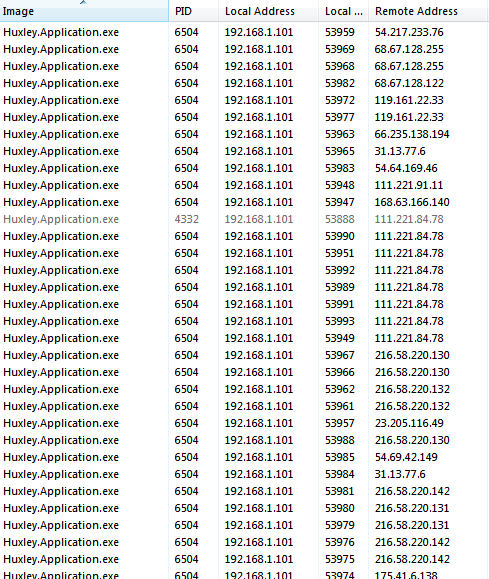 I noticed this morning that the speeds seem to be better for the MS servers and AR is running fine.
I should also point out that after 5 to 10 minutes, many of the other connections cease, leaving predominantly the MS and Amazon servers. (Azure and AWS)
I assume the other connections are for tracking, analytic, etc.?
Still the speeds seem to vary a lot.

I had sent you a Private Message requesting this information on the 7th of April. It appears you've not had a chance to read the message yet.

When you do have a moment could you please provide the details of the ISPs that you tend to use when working on AccountRight Live.

Got a reply from support stating that their was some settings on the developers side that were causing these issues and the numerous unwanted links.

Its apperently been fixed so I would like to thank them for the quick response. I'm eager to run some more tests when I have the time.

It is a concern these days on privacy and security and personally I think thank extra care needs to be taken.  Financial and business data shouyld always be treated with utmost sensitivity and security.

NOw they just need to sort the speed concerns

Thank you again for bringing this to our attention and for your patience while we worked in resolving it. Thank you also for taking the time to update this post.

Please do post again if you have any queries or concerns in the future.