Suggest that we are able to add a 2nd page to all quotes/orders/invoices for things like Terms and Conditions that can be automatically printed within MYOB.

As a minimum and pre-cursor to this suggest that the Labels format be changed in AR Live to allows us to have 1 A4 label on the page so that we can use this for Quote Terms and Conditions like we have been using in previous versions of MYOB.

Thanks for the great Idea. We would love to hear from other users what you think. Please keep the votes and comments coming.

I have just voted for this...

This facility would be beneficial to contact existing clients with newsletters or other correspondence outside of your personalised letters / which seem a bit restrictive to use via email, or outside of the letters that you customise...

I hope this is under serious consideration!

I contacted MYOB this morning to ask if MYOB are in making changes to AccountRight V19 to enable T&C to be sent to customers with the invoice. It has been some years since I last enquired.

I was told this is MYOB's No. 1 request but staff advised they are unaware of what was happening.

It was suggested I post a comment on the MYOB Forum to which I replied comments have been posted regarding this issue since 2007, that is now 9 years. To either have a second page or to have a separate option tick to send T&C or not doesn't sound like difficult programming.

When the post in this forum was put up in 2012 MYOB replied saying Great Idea, under consideration.

- You guys need a Mojo re-alignment or you'll quickly find yourselves with the dinosaurs. 7/4/2015

I have spent 4 hours on the phone this morning trying to get some answers. Staff are just programmed to say... go to the forum and .... add your comments.  I asked the staff member has she read the comments.... cause I don't know how many more you wish to collect over 9 years!

One staffer offered to put me through to the product development team however, I just spent another 30 minutes on hold for the same "post a comment online" department.

Comment by MYOB on 6/10/2015 stating still investigating the possibility, is clearly not the case.  It's just not that hard.

If required we are quite happy to pay a computer programmer to come to Glen Waverley and programme this feature for you.

I do have some concern that the reason this easily fixed problem has not been addressed is because customers are upgrading to MYOB Advanced and MYOB Exo because this feature isn't available. It's better for MYOB if customers upgrade to more expensive products.

I would point out too it doesn't matter how many customer's "like" the suggestion, it is now a legal requirement that all companies should be following for their financial protection. As a customer pointed out above in January 2016 who could potentially loose $200K.

MYOB staff please don't post this is "under consideration", as it clearly is not!

It's like now there is nothing we can do. I googled the details of MYOB Head Office in Glen Waverley thinking I might get in touch with the Product Development Team only to find out it the same press this press that number and got me no-where.

We just wish to know what is happening and why this has taken 9 years.  WE CAN HANDLE THE TRUTH!

This is an extreamly important issue that should have been addressed way back when... I have been trying to add the second page for years on an old version but have just upgraded to the Account right plus and to my supprize it is still not an option. Very disapointed to say the least.

Totally agree with the other users. We definitely need to be able to add an extra page which we can copy our T's & C's onto it for quotes and invoices. Attaching separate doc is too easily missed or forgotten and it's something that's extremely important to protect business. If we inadvertantly forget to attach or our office staff forget....and there is an issue with a customer paying... then we are in trouble with trying to inforce payment etc since the customer will say we never attached our T's & C's.
Surely it can't be that difficult to allow us to copy and paste into another page in the MYOB custom invoice or quote forms. It is always there then and will save a lot of time that you lose on attaching it to every invoice/quote...To me it's no different than needing your GST number on a form - just requires an extra page or two for the info.

Keeping my fingers and toes crossed that we will very soon see this much needed added feature. We love to see MYOB implementing great ideas and improvements to help us on the accounts/admin front in our business.

It doesn't seem too much to ask that there be a facility to add an extra page to invoices which show standard terms and conditions?  I am very sure that I would not be alone in finding this extremely helpful and a great time saver.  The only work around I'm aware of at this stage is to save to disk and then Email manually attaching a page with our Ts & Cs.  Not great use of our time!

Or to be able to print T&C's on the back of the last page.

Just a tick box is needed, with a Form where you can add you normal T&C's

Also agree with other users and find it hard to belive that MYOB cont just sort this out! We need to be able to have the option to add a second page to invoices with header / footer customisable as in MS Word

I too have voted

Please add the ability to add extra last page (or 2 pages) to custom forms for Terms and Conditions.

in order to add 2nd page to an invoice why not use the email function that is available when you have the invoice open? Select the Send To at the top of screen. 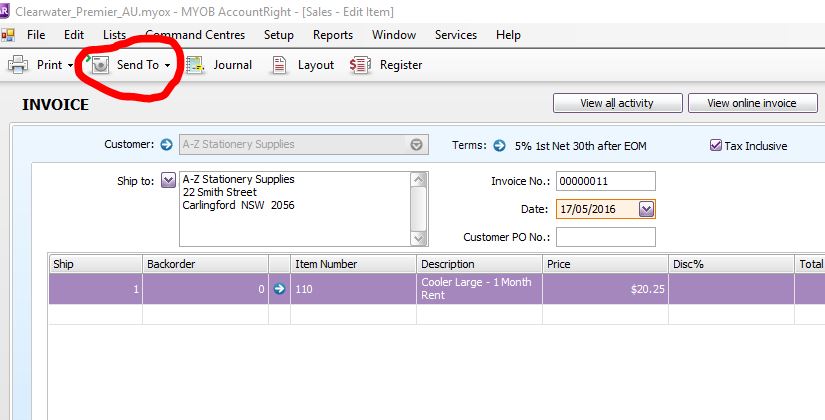 Then use the Attach button to add the T&C to the email. This is much easier than saving to disk to

then email. It is a great feature that many do not seem to know about. 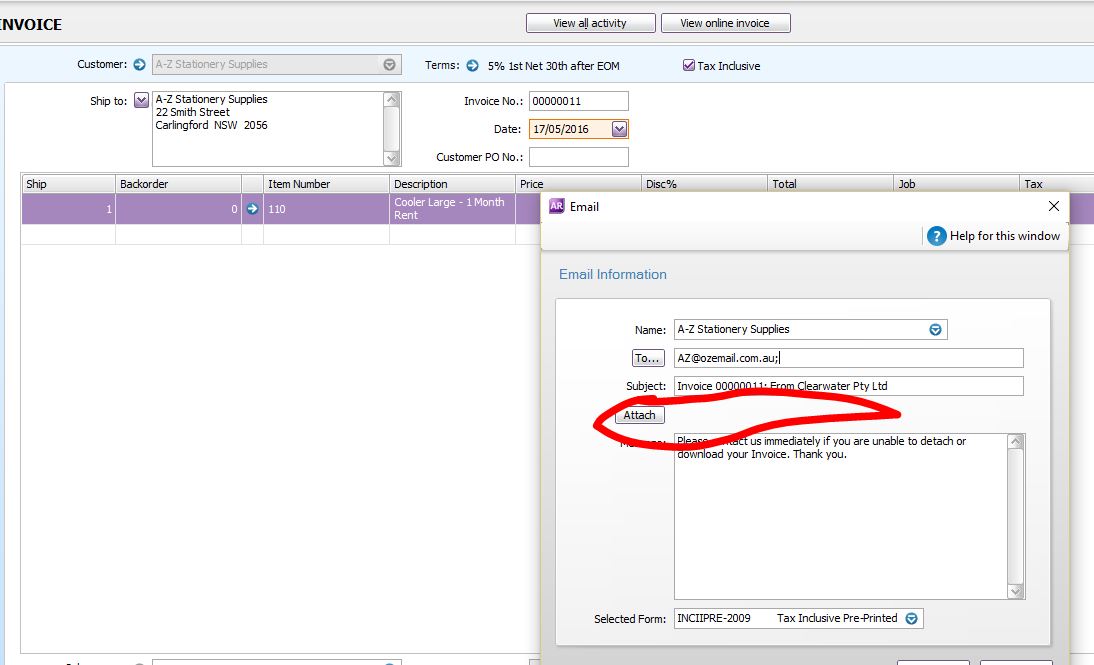 I agree this function is greatly needed

@David_Creewe know about this. We have multiple users creating a high volume of invoices and it would be far easier if it was simply incorporated into the form rather than relying on everyone to remember to attach it. It then saves us going back through hundreds of emails to check it was attached if there's ever a legal issue.