Turn on suggestions
Auto-suggest helps you quickly narrow down your search results by suggesting possible matches as you type.
Showing results for
Search instead for
Did you mean:
Options
Product Ideas

Thank you for showing your support for this idea through the years.

Once again, thank you for your support and your patience for this long-awaited feature.

Here's a novel idea - MYOB, you need to take heed of this extremely important matter.  For over two years, we have been telling you that Superannuation Payments are incorrectly showing as "Pending Authorisation" when in fact they have been reversed or needed to be deleted, yet you have only taken the idea as under consideration.

This is a SECURITY ISSUE.  Someone can quite easily make an incorrect payment in this way, This leads to incorrect payments being made and an extremely messy ledger and bank account statement.  If I go on leave, what's stopping my offsider from authorising a superannuation payment that appears in the Manage Payments window that I need to delete but cannotThe other issue regarding these payments is the date that is recorded when made.  As soon as I authorise the payment (sending it to the Manage Payments window but not paid as yet), this is recorded on the Bank Register on the date I actually entered the payment, not the date it is paid.  A terrible accounting issue because when a payment is authorised at the end of the month, it is recorded there even though it may be actually paid in the following month.  This issue has gone on for far too long - what is MYOB doing about it and if it is still "under consideration", why? Why aren't you listening to what your customer base require from your software?

See these threads (the second one is the current one as the first one has been closed): http://community.myob.com/t5/Staffing-and-payroll/PaySuper-deleting-payments-to-be-authorised/m-p/3...

Requires an URGENT fix, over two years is completely UNACCEPTABLE!

Yep I can't agree more, I find it very disappointing that it seems to take MYOB so long to action any issues. Really is just not good enough.

2 years for this issue and about the same time frame with regards to another issue Re: Credit Card Surcharge where developers are 'currently considering the option of credit card surcharge' ... again another no brainer. As if business isn't hard enough anyway in the current climate that they wouldn't want to recover costs where possible. Please, if you haven't voted on that one then head over and do so.

I'm fairly new to the MYOB Community but I dread to think how long it will be before these and many other 'Under Consideration' Ideas (812 of them in total currently by the way) let alone the 952 'New Ideas' (good luck to those). I'm not a programmer but surely some should be reletively easy to fix especially the ones that pose security issues?

OK. This is a ridiculous situation for which I'm struggling to understand why things haven't been progressed and resolved since it was initially brought up in the forum 739 days ago (Yes, the original post was closed - http://community.myob.com/t5/Staffing-and-payroll/PaySuper-deleting-payments-to-be-authorised/m-p/32... - so this is the oldest one I've managed to find, just 716 days).

I don't get it. Is it unclear what a massive liability this flawed system design creates?? Just in case there is a misunderstanding here I've inserted a screen shot to illustrate the issue: 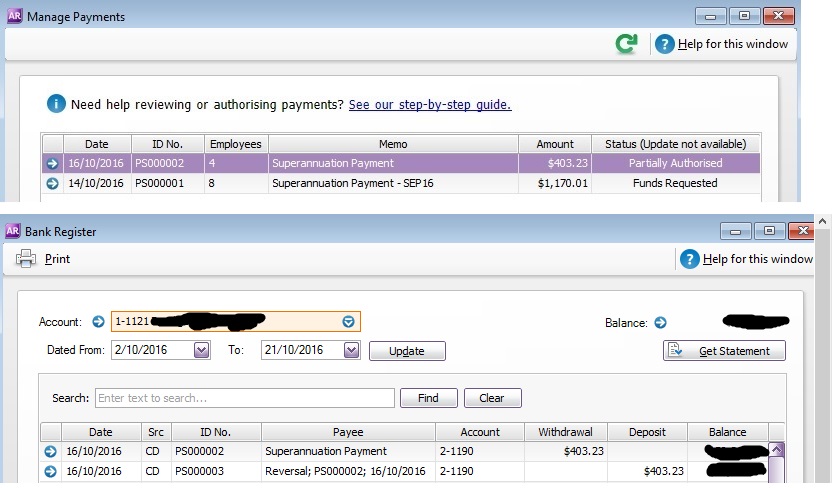 There you have it - an errant "Pay Superannuation" was put through and authorised by a single party in my organisation. After the mistake was realised (the person should have gone to "Manage Payments" and authorised PS000001) a reversal was put through. HOWEVER, PS000002 is still present in the Manage Payments window and can still be authorised by another party(!). How do I realistically stop someone from errantly authorising this payment at any point in the future whilst it is still available to do so? Sure, I can instruct the handfull of current authorisers now, but as time goes on this is a ticking time-bomb just waiting to go off.

I strongly feel that the developers have failed to draw up all the scenarios before building this superstream module and implementing it. What's more, MYOB management seem to have their head in the sand over the ramifications of these shortcomings. My observation to support this is that I have an outstanding "issue" reference where the Client Support team are initiating an "investigation into the background of this issue with the Product Development team". Given that I have been told that 20% of calls to the Superannuation Resolution Team are about this very issue, I can't fathom why it is not in MYOB's interests (as a secondary driver over repairing a fundamental flaw) to fix it in order to drive down their support costs. On the other side of the fence - why must I lose sleep at night worrying about someone mistakenly authorising the transfer of this money into funds which will be very hard (if not impossible) to recoup. It's only limited to $403.23 but what about EVERY other MYOB superannuation user or my organisation's next potential errant transaction thats a much greater value? (BTW - We are a simple, modest, not-for-profit.)

I believe in constructive criticism so I offer a a solution (one of a handful I can think of).....

Given that the system is designed to reverse transactions rather than delete for audit purposes, automatically change the status of the payment in the "Manage Superannuation" window (once the transaction has been reversed) to "transaction reversed before authorisation complete". This particular status, will of course, never be allowed to be authorised by another admin and hence stop MYOB from requesting the funds from your bank account. I'd also introduce the ability to "decline" an authorisation which then puts some further checks in place to prevent an unwanted funds transfer in the event thet the "PS00x" hasn't been reversed.

So the real question is - How long do we have to wait for a solution to a system function that is not fit for purpose? At this stage, "under consideration" by the development team just doesn't cut it. Is MYOB willing to underwrite the total sum of liability waiting to be authorised when the admin users for these applicable accounts don't want them there?

There's little else to say except please, MYOB, state what you are going to do to resolve a very real issue that has fiscal implications for each and every payroll customer AND provide us with a timeline for it's implementation.

(- I realise that adding my accreditation is pretentious but I wanted to lend some gravitas to my plea/observation).

To all readers of this post. Please vote for this BUT MORE IMPORTANTLY - go to the forum post http://community.myob.com/t5/AccountRight-Idea-Exchange/PaySuper-delete-or-hide-reversed-paysuper-pa...

This is the oldest forum post I can find on this topic. It's important to vote against this particular post as the weight of numbers appears (from what I can ascertain) to be the only factor on whether this series of pleas will get the required inertia to warrant a much needed resolution. This sucks but it appears we have to play the game. Thanks.

I agree that at very least be able to change the status to deleted or reversal complete or render the transaction useless so it cannot be authorised. This is very important for business that have 1 person authorising and they don’t create the payment and is unaware of the reversal. Thanks

Please make a function for the reversed superannuation payments where you can mark them as deleted or as an error file as it is confusing to see the transaction as waiting for authorisation when there is no reason to process it. I can see double up super payments happening by accident.

Totally agree confuses my clients needs to be fixed.