Turn on suggestions
Auto-suggest helps you quickly narrow down your search results by suggesting possible matches as you type.
Showing results for
Search instead for
Did you mean:
Submit an Idea
Options
Labels
Showing ideas with label Banking. Show all ideas

Moneywise October 2015
1 Comment (1 New)
When I am in the bank register and select a supplier to record a payment, if there has ever been a bill created for this supplier MYOB will display a warning that I should be using Pay Bills. I then have to go into Pay Bills and bring up the supplier to check if there is in fact any invoices to be paid off before going back to the register to make my entry. I would love it if when we select a supplier in the bank register MYOB could display the balance as well. "Supplier balance" ... View more
0 Votes
See more ideas labeled with:

DKP September 2015
2 Comments (2 New)
Hi ya I have seen similar post in regards to Payments field, but was wondering if you can also take on board the Spend Money feature.   When i utilise Spend Money's front screen, i have to use the mouse to scroll thru my Account list to select the correct allocation.  But if i utilise the Split feature of Spend Money, then i can utilise the page down key to scroll thru the Accounts list. (prefered method)   I have noticed that this happens in other areas too, where you cannot use the Page Down/Up key to scroll thru lists, using the mouse is taking valuable micro seconds.........  you understand, i know...   Cheers   D "Keystroking" ... View more
0 Votes
See more ideas labeled with:

AndrewOHM September 2015
2 Comments (2 New)
Is it possible to create a function in bank feeds that deals with a multi BPay or multi Pay Anyone bank payment.  If you go to bank feeds and click the 'new' button, you can select one supplier to allocate a portion of the payment to the relevant invoice, however it doesn't allow you to add any additional suppliers to pay the other invoices that make up a multi payment.  It just defaults the balance to 'finance charges' of the first supplier's invoice you choose.   I have been told the only way to deal with this is the old way via 'pay bills' and then go into bank feeds and tick off the payment, which actually takes longer.  I thought the idea of bank feeds was to make everything quicker and easier.   "Paying multi invoice batch payments" ... View more
0 Votes
See more ideas labeled with:

Get Statement: Ability to save process and return/continue at later stage

Bank Feeds: Ability to remove the log/sign in window for cloud based files

Kelly81 March 2015
4 Comments (4 New)
When I already have the bank feeds screen open (and have had to already login to bank feeds to get that far) I should not have to login again when I click the get bank feeds button.   It is frustrating having to login twice.   'Bank Feed Login Screen"   ... View more 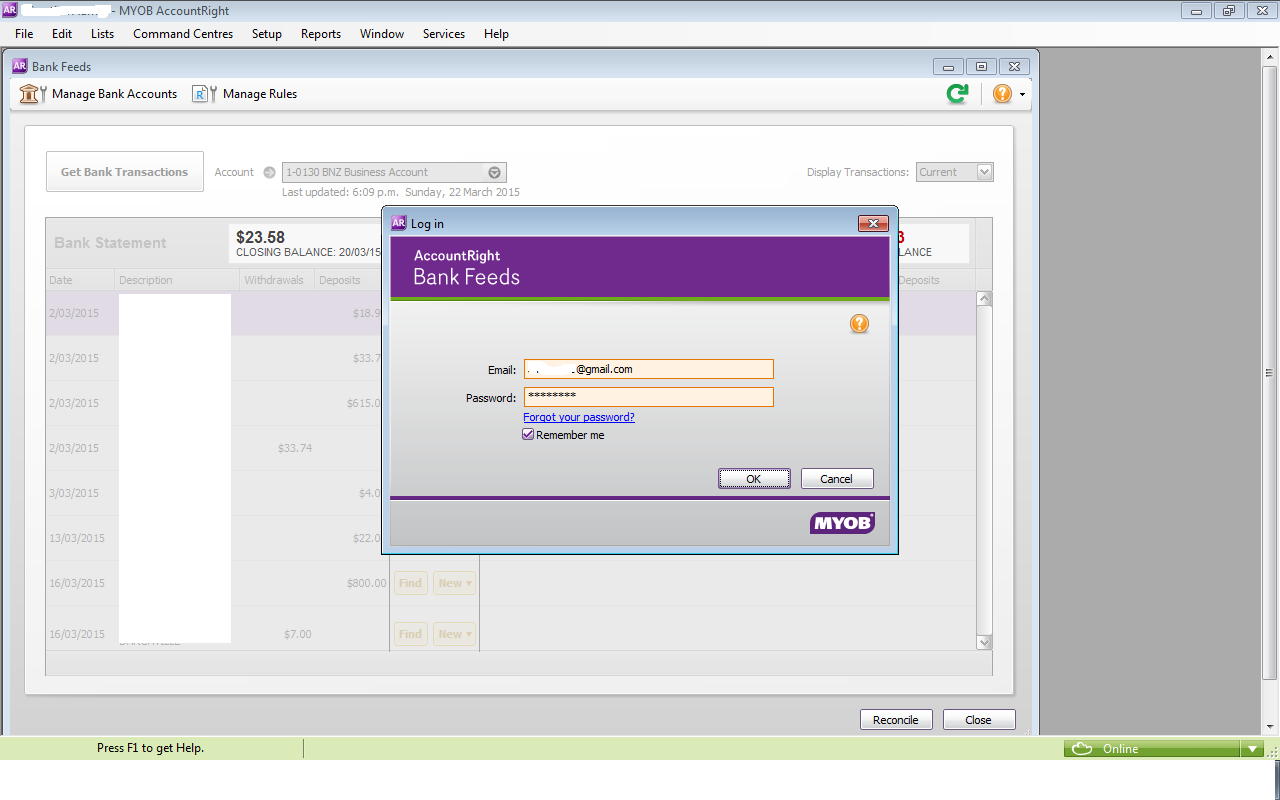 AlanT October 2014
4 Comments (4 New)
Hi All,   When I'm posting bank transactions in AccountRight, I use the Bank Register window and enter items at the bottom of this window.   When I have a Spend Money item that needs to be split, I usually enter the date, the payee card then click the [Split] button to enter each line item.   At this point the Spend Money window opens but has now defaulted to use Tax Exclusive values!   Why?   Up until this point all the amounts have been tax inclusive.  For every entry, I now need to remember to tick the Tax Inclusive option as my preference has not been remembered.   Could you please fix this so that it either remembers my previous settings or allows me to nominate my preferred default option in the Setup » Preferences.   Thanks,   Alan   "Splitting spend money transactions" ... View more
0 Votes
See more ideas labeled with:

pH September 2014
1 Comment (1 New)
In ARL Plus the Bank Feeds Option is working OK. However, when I am processing the cash that we banked and the EFTPOS figures using "NEW" then "RECEIVE MONEY" the cursor on the details screen defaults to "Acct No".  It would be better if it defaulted to "PAYOR" as I'm sure that many of us have "PAYORS" already linked to an "Acct No".  You have to move the cursor manually to "PAYOR" - not a big deal but inefficient and it would save the bother of looking an account number up. Regards pH 'Bank Feeds Cash EFTPOS received" ... View more
0 Votes
See more ideas labeled with:

jlouise September 2014
2 Comments (2 New)
In the July 2014 upgraded version of AccountRight I can't change the status of "to be emailed" to "already printed or sent" once I have paid the invoice.  I have several remittance advices sitting in "Review Remittance Advices before Delivery" and I want to delete them and/or change their status as the customers don't have email addresses.   'Remove Remittance Advice without email address AccountRight 2014.3 Live" ... View more
0 Votes
See more ideas labeled with:

Bank Feeds: Rules - All deposits to go to a certain account

cct002 June 2014
1 Comment (1 New)
It would be very time saving if we could have a general transaction rule that allows us to allocate ALL deposits to the one account. This would  especially be beneficial for businesses like cafes, doctors and childcare centres where we have many many daily deposits that we don't need to allocate to a sale invoice.   "General transaction rule" ... View more
0 Votes
See more ideas labeled with:

Bank Feeds: Card Type for new contact based on type of transaction

Geoff_Colwill May 2014
2 Comments (2 New)
Hi Team In the Bank Feed screen when entering a Spend Money or Receive Money and entering a new contact, it would be good if it would default to Supplier and Customer respectively. At the moment it appears to be random I haven't checked out the Banking Spend Money etc?   Thanks   Geoffrey 'Bank Feed screen Receive Money new contact default to Customer and Spend Money default to Supplier" ... View more
0 Votes
See more ideas labeled with:

Status: New Submitted November 2013 Submitted by Alex_B2B November 2013
2 Comments (2 New)
Hi,   It would be great to add a folder storage link to cards: EG Card for John Smith, I would like to export all the RCTI's for this card and save them in a folder C:\RCTIs\John Smith    MYOB already generates RCTIs in a pdf format and emails or prints them, but it would be great to be able to save them.   Each month we run reports paying our suppliers and if we can save the RCTI to a folder it would be a huge help to us.    We would like to save RCTIs and Remittance advises.   Happy to discuss further if you need clarification   Alex Rodov B2B Referral Partners   "Exporting RCTI & Remittance Advice to folders" ... View more
0 Votes
See more ideas labeled with:

Status: Done Submitted February 2013 Submitted by LLV_Kent_F February 2013
2 Comments (2 New)
We are using MYOB Premier v19.7 and basically have staff performing two roles: one undertakes our payroll (HR); while another undertakes the day to day banking functions including bank reconciliations (ADMIN). What we would like to be able to do is allow the ADMIN person to undertake bank reconciliations using just the headline figure from a pay run and not be able to drill down into the detail.   We have been advised that the current situation is: If ADMIN has access to see the final amounts in payroll, they will have access to view the transaction. There is no way to block access to the transaction, without also removing the ability to see the final amounts as well. It does seem to be odd that other aspects can be protected, but not this part. Our only work around therefore would be to either have HR do our bank reconciliations as well; or pay for a separate bank account to run our payroll. As we can lock down our bank accounts to only see headline figures for these payment batches it would be great to have future versions of MYOB do the same. "Protecting payroll detail in bank reconciliations" ... View more
0 Votes
See more ideas labeled with:

sandra_rca_1 February 2013
2 Comments (2 New)
Hi, I posted the following on the forum & it was suggested I post it here. Currently it seems we cannot edit a transaction created from the bank feeds screen. Are there any plans to change this? It is frustrating that you have to go out & locate the transaction to edit it. When the transaction comes through on the bank feed it has a heap of useless information. It would be nice to be able to replace this with a card name & useful information. It would alos assist when trying to locate transactions by card. Thanks Sandra   "Edit Transaction from Bank Feed Screen"     ... View more
0 Votes
See more ideas labeled with:

BA December 2012
3 Comments (3 New)
Would you like to consider a simple modification to the bank reconciliation screen please to make our lives a little better? When a lengthy reconciliation is being done it requires scrolling backwards and fowards, this scrolling increases as more entries are matched. Would it not be better to hide the reconciled transactions?   "Hide matched transactions during Reconciliation"   ... View more
0 Votes
See more ideas labeled with:

vbatax December 2012
1 Comment (1 New)
Can you have a function to choose to select the amount to match to also.   Eg;   If Telstra $9.18 appears code to Advertising If Telstra >$10 appears code to Telephone   Thanks   "Bank Feeds to Transaction Auto Code Fixed Value of Telstra coding to Advertising and setup another auto code to code to telstra over $10" ... View more
0 Votes
See more ideas labeled with:

Helen-Webley December 2012
3 Comments (3 New)
I have had several requests from accountants who would be recommending a change to AccountRight Live if more of the rural institutions were included in live bank feeds. In particular they mentioned Fonterra, Farmlands and RD1   is there any time frame when this would be implemented.   "More Financial institutions for bank feeds" ... View more
0 Votes
See more ideas labeled with:

Spend Money/Receive Money: Enter key to navigate to the next line

Julie_B November 2012
3 Comments (3 New)
Hi, when I'm posting entries in Spend Money, I use the TAB key to move between fields.  If I'm splitting the coding for an entry, once I keyed the amount for a particular GL code I used to use the ENTER key to create a new line (ready for the next post).  This is not working .  It continues to tab through the fields, and once the cursor is in the memo field it then starts creating blank lines within the memo field.    I'm having to TAB all the way through to the end of the line, which is when it then creates a new line for me to continue the entries - dare I say it again, having to take my fingers off the keyboard and use the mouse.   It doesn't make a difference to data entry if I have a tick in the preference box or not .   "The Enter Key not working correctly?" Hope this makes sense and you can help. Can we please have the simple things that worked in v19 in 2012, please.   Julz ... View more
0 Votes
See more ideas labeled with:

Status: Done Submitted September 2012 Submitted by KimHamill September 2012
2 Comments (2 New)
Apparently to set up Bank Feeds in the AccountRight Live range is going to take up to one month.  The competition take around 5 days.  Is there any way to speed up this process? "Bank Feeds" ... View more
0 Votes
See more ideas labeled with:
Forum Feedback
Empty