I have migrated my forms to the new AccountRight and I am finding it impossible to alter them - as they did not migrate correctly.  It is only little things I need to do like expand a field to stop the figures wrapping onto the next line.  I have watched all the help videos and have been told to just grab the anchor points and drag them to the size I want, if only it were that simple.  I cannot grab any anchor points. 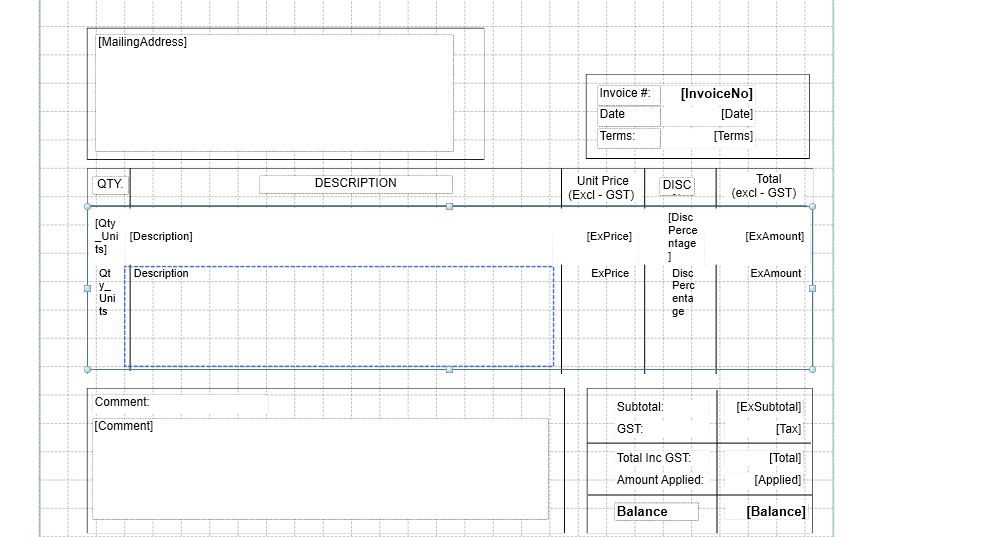 I need to make Qty larger - as it won't take 1000 without wrapping around; I need to make ExPrice larger, try and make the Description smaller etc.  But I cannot grab anchor points.

Is there anywhere that I can simply type in the size as we once could?  I have wasted far too much time on this and it is doing my head in.

I have had this problem too. I think I have altered the size of the field but when I save and exit and then print off the invoice I find it has reverted back to how it was.

With customise forms, AccountRight 2019 uses more of a table approach to the invoice information (such as the Quantity, description..). As such, if you are looking at updating the sizes you want to expand out the column headings.

From the screenshot you have provided, you want to drag the cursor over the column headers i.e [QTY_Units] [Description]... so it changes to be a double-headed arrow allowing you to drag the field out to the desired width.

Thanks for responding Steven, I appreciate it.  I have tried your suggestions, and have found that whilst I can expand the field, it just moves the other fields over and I can't find a way of bring them all into the correct

I am also experiencing the same problem as Connockity has.  Below is an exaggerated expansion of one of the two columns I need to expand.  I then saved it and ensured I printed off the saved invoice and nothing has changed. 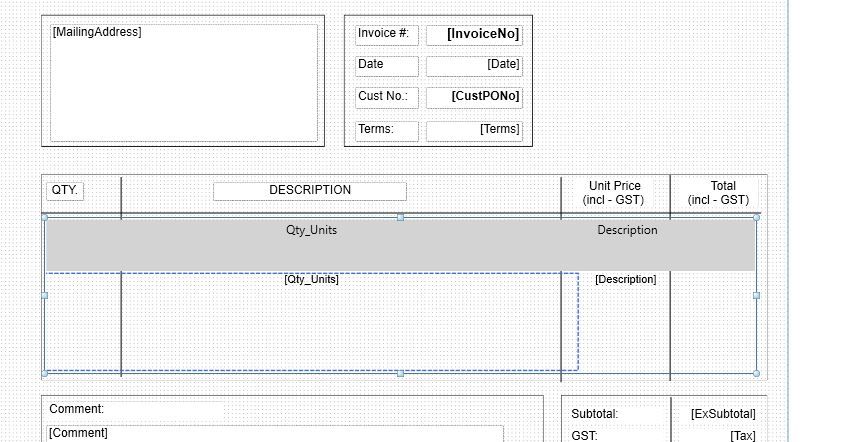 As you can see, it should have Qty_Units take over the whole form.  However it didn't seem to make a difference at all.

Can I no longer just type in the sizes as we once could?

Any solutions would be greatly appreciated.  The costs of keeping MYOB and getting a suitable invoice is starting to mount.

If you resize a column this will impact other columns within the table, you would want to re-size the columns as intended. Generally, you would be looking at starting with the left and then moving through the columns resizing as appropriately.  For example, update the QTY column to be the desired width, which in turn will move the description column, to which you can then resize appropriately.

In terms of your second screenshot, I would make sure that you are using the customise form i.e. ensure that it is set as the default customise form.

Thank you for the help, after spending another couple of hours, I have managed to save at least one form to get it to do what I want it to, providing of course I don't invoice for a million dollars, it will work.  I only have three more forms to do.

Just a couple of things for any future changes MYOB might make:

1.  I am not computer illiterate (in fact I even had our IT guy watch me as I tried to follow your instructions), however this new system of changing or updating forms has made my life incredibly difficult and if I could have just double clicked in the field I needed to change and typed in the measurements I wanted, what has taken two hours would have taken 5 minutes.

2. If I could video what I was doing to show you, you would see how difficult it is to get that double arrow to move the fields and re-size them.

3. Based on this method of creating forms, and the difficulties I have had, I would never recommend to others that they use MYOB.  Basically whoever thought up this method of doing forms, hasn't taken into account the end user.

4. For Connockity, who found that the forms did not save the changes, I had that same problem and only fixed it by clicking on the form, and saved it with a totally new name.  If I tried to keep the form names I had used in the past, and just override them it didn’t save the change (as a result I now have a list of useless forms).

Finally, whilst I really do appreciate all your help, I cannot recommend enough that MYOB consider creating an update that will allow us to type in our measurements as we did in the past.

Again thank you for your advice,