May - last edited May

May - last edited May

I would like to report an MYOB Essentials bug in the new STP reporting of the JOBKEEPER- START-FN code to the ATO. The new automated approach set by MYOB requires us to use the Payroll > Payroll Reporting menu to set the initial fortnight for appropriate staff. (This is the new approach, not the previous manual approach of setting pay items ourselves discussed elsewhere on this noticeboard.) When you use the Payroll Reporting menu and select the staff you are then required to press a "Notify ATO" button that, in theory, should send a NIL STP report to the ATO with the JobKeeper allowance codes for the selected employees.

The bug is that the STP report is NOT NIL. The raw data sent to the ATO duplicates the information from the previous payroll period. (I don't mean the YTD information for each employee - clearly this should be repeated from the prior period because it has not changed. But the STP report ALSO contains the "Period" totals as well as the YTD amounts. The "Period" totals should NOT be copied from the previous report. They SHOULD BE NIL. However, it appears the "Period" amounts are INCORRECTLY copied from the prior period, not just the YTD amounts. My evidence is below.)

I attach three screenshots. The first shows the Payroll Reporting centre "list" of STP reports. That list appears to correctly show a zero dollar amount for the STP report sent. I have circled the fields in GREEN.

The second screen shot shows the MYOB PDF report from the STP line item that I have selected in the first screen shot. It shows that the "Period" totals for what should be a NIL REPORT are actually duplicating the PRIOR pay period totals. THIS IS WRONG. I have circled the figures in RED. (Note that the individual employees in the file CORRECTLY show no increase in their YTD amounts. However, the STP reports a "Period" gross total THAT IS WRONG while also showing YTD amounts for individual employees THAT ARE CORRECT.)

The third screen shot shows my ATO Business Portal login. You can access the STP data that MYOB is sending to the ATO via the ATO Business Portal under the "manage employees" menu item on the right. You can see that what should be a NIL REPORT is actually an incorrect duplicate the of the previous STP report below it. I have circled the figures in RED. This is an error.

I have tried to cover up sensitive information in the screen shots.

I am concerned that the ATO could demand this additional erroneous PAYG tax.

I feel this is a bug in the MYOB Essentials implementation of the NIL REPORT that it is sending when reporting the initial JobKeeper fortnights. I cannot find any method of reporting this bug to MYOB except via this forum.

Can anyone else confirm that they see the same behaviour in their MYOB Essentials? Can an MYOB representative confirm how to proceed with this issue. 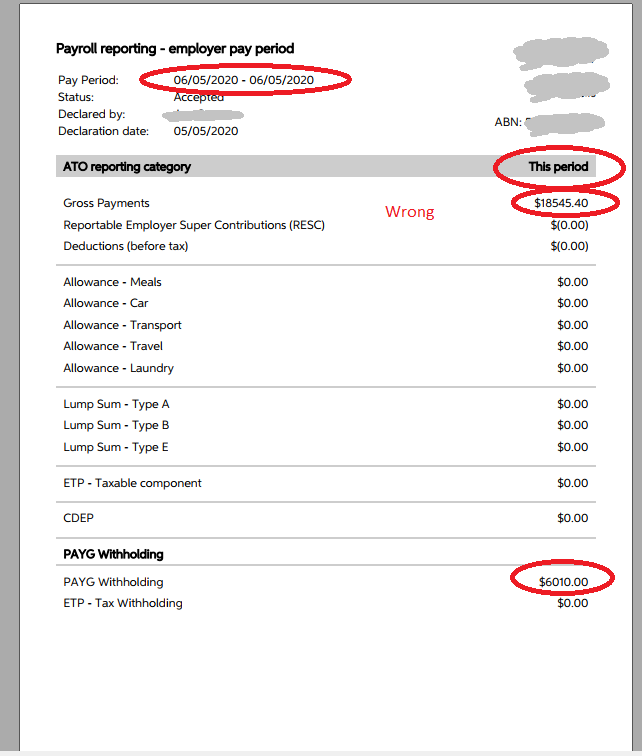 We aware that some clients are seeing a different Gross Payments amount in the Payroll Reporting Centre when the START FNxx codes are being sent to the ATO. This is due to the Payroll Reporting Centre displaying the fortnights figures from the FNxx fortnight.  However, it is important to note that the correct YTD figures have been sent to the ATO.

The way STP works is that it updates the Year-to-date (YTD) amounts each time you send a report. Each report is time and date stamped and the ATO use that stamp to determine the most recent report. The YTD amounts from the most report are then displayed in employee's myGov accounts and used to determine your BAS/PAYG and super obligations.

You are correct that all individual pay events are reported in the ATO Business Portal, this also includes any pays that you have deleted or reversed in your software as the ATO does not allow you to delete STP reports. If you have reversed or deleted any pays the total of all the pays listed in the portal will not be the same as the current YTD amounts.

I'm not sure why the Business Portal does not show the YTD amounts, that is something that I asked when I was a bookkeeper and many other bookkeepers/accountants have also asked. It is just a list of the pay events that you have reported through STP.

Please let me know if you need further help.

If my response has answered your enquiry please click "Accept as Solution" to assist other users find this information.

Thank you for your response. But I think it glosses over the fact that there is still, as a FACT, a BUG in the MYOB STP report. This should be corrected - at least for future such NIL STP reports. As you correctly state, each STP report contains correct YTD figures for each employee. However, each STP report ALSO contains a single "header" record that reports to the ATO the gross totals of all pays and PAYG deductions that are contained in that particular STP report. As you note, that single header record is incorrectly picking up the totals from the pay of the FNXX fortnight being reported (I wonder what would happen if different FNXX data was being reported for different employees in the same STP report?).

You appear to be glossing over the fact that THIS IS A BUG and that those erroneous "Period" figures are, as a fact, being reported to the ATO (even if the YTD figures are correct). Even if the ATO is going to ignore these errors, why would MYOB be satisfied with knowingly reporting those errors to the ATO? Why wouldn't an accounting company want to pursue accuracy in its STP reporting? Such accuracy would at least avoid confusion for your users (and potentially the ATO).

The "Period" figures of which I speak SHOULD BE NIL for this particular COVID19 JobKeeper report. The fact that they are not is a BUG. In my opinion, a NIL report should, in fact, be a NIL report, not a "partly-NIL-report-with-accurate-YTD-figures-but-an-inaccurate-period-header-record". Not caring about this bug does not send a good message. Could you please report this bug, escalate it to someone in your MYOB QA team who cares about the accuracy of your STP reporting to the ATO, and then have the bug corrected.

I'm sorry to hear that you feel I am glossing over this. In order for a payroll category to be reported through STP it must have an amount allocated to it. Normally this would occur when processing a payrun. When you notify the ATO through the JobKeeper payments tab, the software needs to allocate an amount to the JOBKEEPER-START-FNxx code so that it will be reported through STP. This is why some users are seeing an 'extra' pay in the Business Portal, the software is working as intended and required.

As I explained on another post to which you responded, we are aware that this extra pay in the Payroll Reporting Centre has caused confusion for users. So we changed the way the software processes that notification and it does now display as $0.00. However, as previously explained, if the notification occurred prior to this change the extra pay cannot be updated or changed.

I will pass your feedback on to the relevant team.