Share your ideas for improving MYOB Essentials Accounting. Vote on ideas and discuss them with the MYOB product development team.

Turn on suggestions
Auto-suggest helps you quickly narrow down your search results by suggesting possible matches as you type.
Showing results for
Search instead for
Did you mean:
Submit an Idea
Options
Labels

Status: New Submitted a month ago Submitted by Disabled1 a month ago
Comment
When sales qoutes where past expiry it used to be that they were identified as expired. This was a great tool for service agreements. It no longer does this. Why? ... View more
0 Votes

Status: New Submitted a month ago Submitted by Disabled1 a month ago
Comment
Why was expiry removed as an option. This was an essential tool to me. Please put back ... View more
0 Votes

Status: New Submitted a month ago Submitted by WB81 a month ago
Comment
I would like to see any info that needs to be updated in employees details is then transferred across to other relevant sections. A staff member has bought in an updated TFN sheet as we need to decrease the amount of tax taken out each pay. I have updated this in the employee section but i still need to manually change the tax amount each week as the change does not carry over to the pay section. I have a new employee that is unable to fill in time sheet as her email address is registered to another user, I would like for an employee to have the option to delink their email address if they choose and relink it to their current employer. ... View more
0 Votes

hermitude January
Comment
Hello, Other software packages allow you to filter by pressing on a quarter/month/financial year.   MYOB - you have to manually type the dates, every, single, time.   Who reckons this would make things quicker? ... View more
0 Votes

Status: New Submitted December Submitted by mickskez December
Comment
hi team, why not provide the option for myob essentials in-tray to create a new invoice , eg from an invoice book to an existing invoice rather than limit it to expenses. ... View more
0 Votes
See more ideas labeled with:

How do I enter Purchase Order numbers greater than 15 digits long?

Status: New Submitted December Submitted by DD3 December
Comment
Hello, I telephoned to ask whether the Issued Date and Due date columns could be moved - so they are not next to each other - as this is causing some confusion. I was told this is not possible. I would have thought moving the column would not be difficult and it would just be a mteer of changing settiings. Is this true, and it is not possible to miove the columns? Seems silly to me and rather frustrating. I have attached a screen shot to better explain what I am talking about. ... View more
MYOB screen shot invoices.docx ‏94 KB
0 Votes

Status: New Submitted December Submitted by FiBuchet December
Comment
I have an MYOB Essentials account.  We have just transitioned to a new company entity, which is performing and trading in exactly the same manner as the previous one, therefore it requires exactl the same Accounts to be set up so I can code the bank transactions accordingly.  I have just discovered that I now need to manually set up all the Accounts I would like to use for the new company.  This means I need to print off the old company Accounts, and go through manually to add those that are missing from the new company profile.    I would like to see MYOB add  the functionality to be able to duplicate an existing company profile into a new one, for instances where the trading is similar or identical.  This would save me a lot of time and fiddly effort. ... View more
1 Vote

gleakk December
Comment
I have a client using AR, and when I took on a new client who uses Essentials I was shocked to find I couldn't create aba files for supplier payments. My client can't afford to upgrade to AR, but this is so big an issue we are looking at other software options. If it can be done for payroll, I see no reason it shouldn't be available for supplier payments. ... View more
1 Vote

Status: New Submitted December Submitted by ALD December
Comment
The MYOB Essentials does NOT give a report that spits out the total number of hours worked by all employeees in a given period as well as the total hours worked by all employees - we need this to fill in the NZ stats quarterly employment survey. The old ACE PAyroll did this. Now I have to go back and find the hours of all emploees and add them up manually. This is crazy! Could this facility be added to the Essentials. ... View more
0 Votes

Status: New Submitted November Submitted by sas100 November
Comment
I think it would be a great time saving option to be able to import/export employee details between MYOB essential files. In the instances where additional branches are established, currently employee details need to be entered manually and this is very time consuming. ... View more
1 Vote

firstresponse November
Comment
Our store manager has suggested additional lines to fill in the item register. Would save so much time knowing if the item is current and last time purchased. See attached file. He has drawn additional information in RED.     ... View more 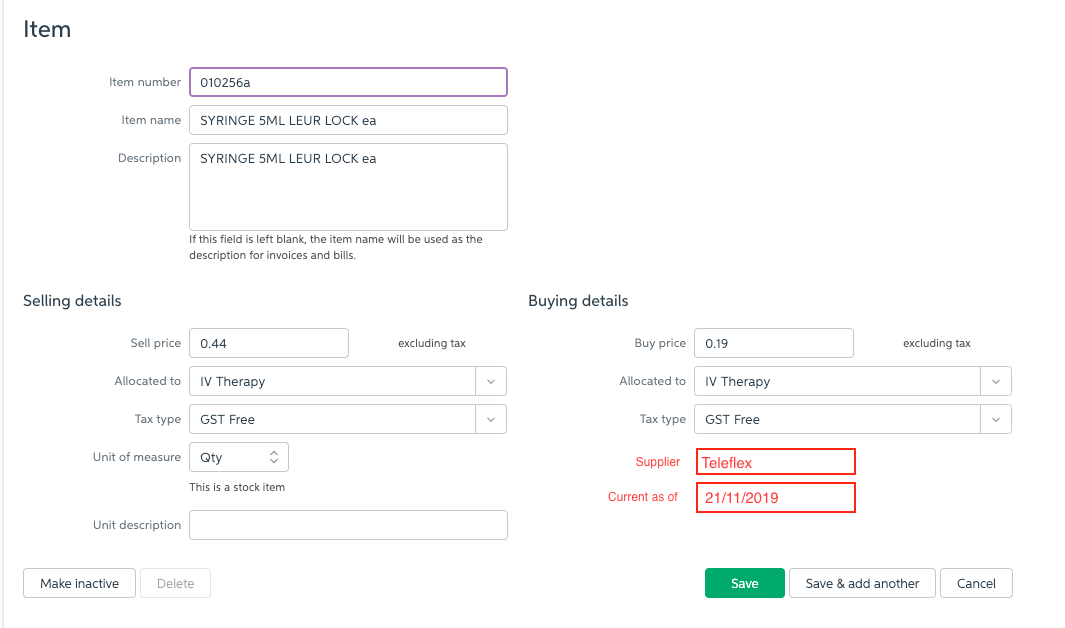 Status: New Submitted November Submitted by V3 November
Comment
Hi guys,   I have these 2 suggestions below - that would significantly make my life easy. (Don't get me wrong, your in-tray feature is a lifesaver already as-is. These are 2 suggestions which would make it even better) - To have a Save & Next bill once I am done with a bill in the tray I understand that there could be confusion on whether to load the next one as a "New Spend" or the "New bill", personally, my suggestion would be to load it as the current selection. (i.e. load the next one as a bill if my current selection is a bill ) - Also, the order makes sense to go from the oldest bill uploaded to newest (left to right) either that or load the screen with the rightmost entries in focus rather than the leftmost (It is moderately painful to scroll down to the right every time I finish a bill and have to move over to the next one in the list). ... View more
0 Votes
See more ideas labeled with:

Status: New Submitted November Submitted by Andrew8 November
Comment
Along with bank accounts, can you please add bank feed's from Fuel Card providers (i.e. Caltex/BP/Fleet Card/Motor pass etc). This will make it easier than having to manually upload statements each month.   Thanks Andrew ... View more
0 Votes

Balance Sheet - comparative - I notice that this issue has been raised on previous occasion. a balance sheet without a comparative is not a useful documents.

Status: New Submitted November Submitted by robmcm1 November
Comment
Hello MYOB team   With my business, on a weekly basis I pay more than 20 employees for their payroll within MYOB Essentials Pay centre. I find there is a lot of scrolling up and down the page involved due to the way it is designed and am wondering if the left portion of the page can be in a fixed position (employees name, number of hours which I input and annual leave) as it takes a lot longer than it should of and doesn't feel natural.   I would be very willing to help describe the issue in more detail, feel free to contact me directly.     ... View more 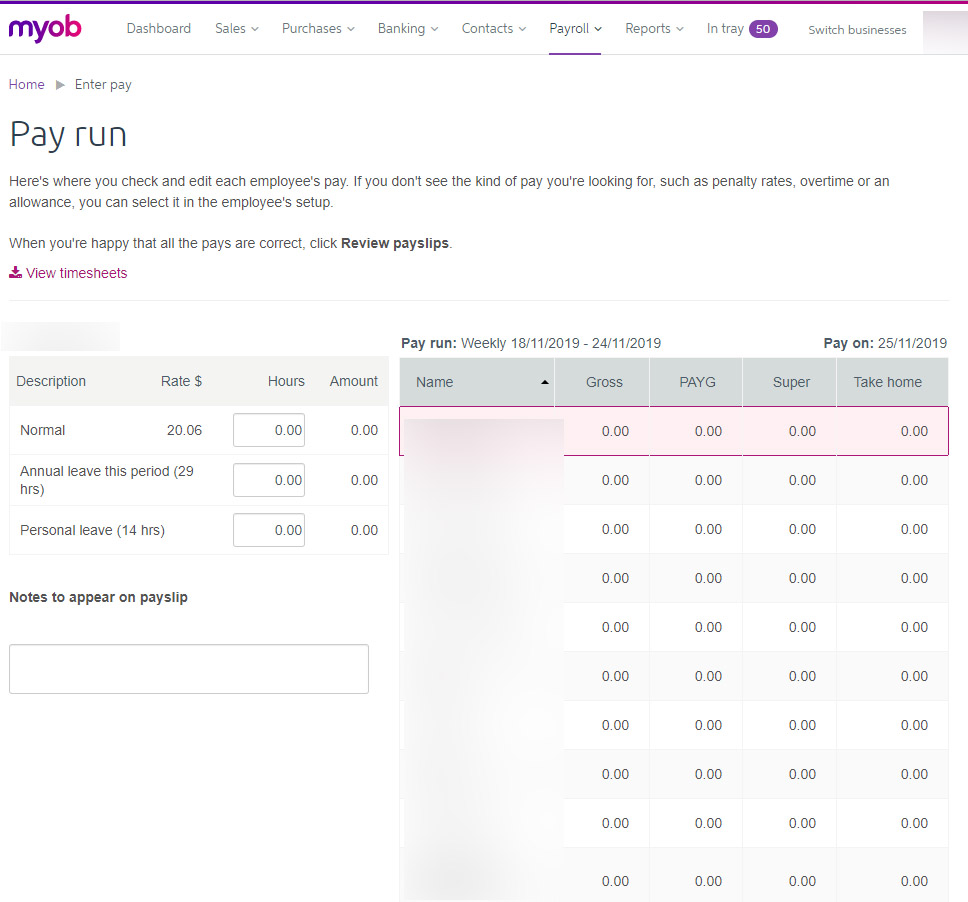 Status: New Submitted November Submitted by Robbie123 November
Comment
Would be really helpful if the tax code "I" worked to  claim 100% of the GST, still only claims 50% when you use this for coding customs invoices, it does goes through into the GST return correctly... thank goodness and thats a start, but not in Audit trails, GST summary reports or any reports. As this has been a known issue since the get go, I can't believe it hasn't been sorted. This is in cash coding the bank transactions and it is still happening with bills as well. ... View more
0 Votes