Bank Feeds: Rules - Ability to set up based on amount

At present we have two transactions per month with the same description - loan debits but for different amounts and different loans.  This description is preset and cannot be altered by the bank.  If the bank feed rule allowed us to allocate a $ amount as well as the description to the rule then the rule would work correctly.  AT present MYOB cant identify which rule to apply as it only works off the description which is the same for both rules.

Unless there are alternatives which could work around this issue?

With the release of AccountRight 2019.3  you have the ability to set up rules based on the dollar amount of the bank transaction.

The Bank Rules seem to be inadequate at the moment. It seems to be an issue that has been around for a while now. It would be much easier to allocate a rule against a memo and an amount which would make things much easier.

MYOB - this is starting to get ridiculous that this has not been addressed...

...especially when you send marketing emails suggesting that bank feeds will save you 10hrs a week (or similar) etc.

As mentioned above, banklink has the knowledge to do a much much better job of it.

I have just updated and started using bank feeds.  The option of using an amount in the rules would be a great time saver.

is it possible in bank feeds to allocate a rule based on a specific amount? If i have a creditor that automatically debits say $50 per month for one thing and $100 per month for another thing that need to be coded to 2 different account codes I dont know how to seperate this as 2 different rules so I was thinking if the rule could be based on the description plus an amount it would work.

BrockM - another excellent question. At the moment, rules can only be set up with descriptions, and it doesn't take into account amounts as of yet. I do think that's a fantastic idea, however, and would recommend you post it onto our AccountRight Idea Exchange for our developers to consider.

Is it possible to set up bank rules to match to $amounts. I have various clients who have regular payments with the same or constantly changing bank identifier numbers which is impossible to match to a rule.

Thank you for your suggestion @CherylMBA

It would be a handy option for Bank Feeds to apply rules based on the transaction amount. I have shared your feedback with the development team.

I was about to post this idea but searched for it and found it here dating back to February 2014.

I am currently using MYOB BankLink and as the attached screenshot shows their rules or "memorisations" as they are called allow for more options.

As people are saying, if they could only chose one of these parameters to be added in AccountRight Live it would be "Value" where you can specifcy the dollar amount of the transaction in addition to the statement details to give added flexibility to the bank rules. 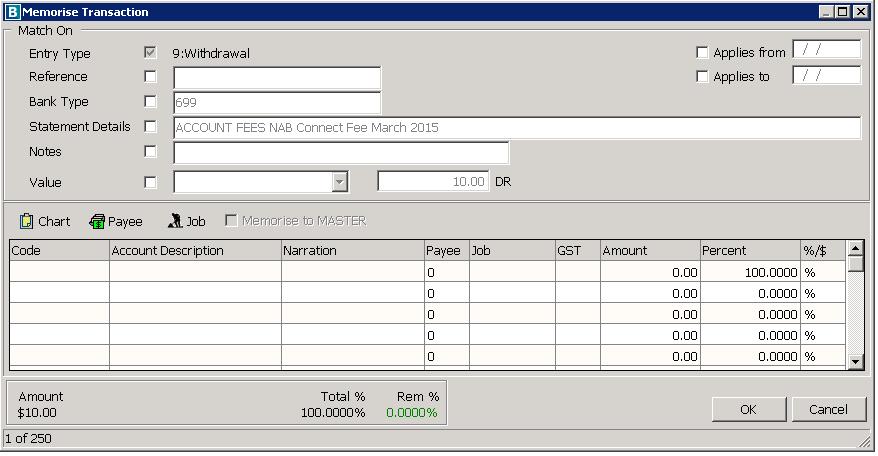 I find it hard to believe this feature isn't in development. I know it is hard to maintain the volume of posts across this forum, but could we please get some clarification from the development team if this feature is in development and if so, which release we could expect it in. Will it be 2015.3, 2015.4, 2016.1 and so on?

I have to honest if this "amount" feature isn't going to be introduced within that time frame I would start considering my options.

*Posted on behalf of snusersname*