As the title suggests.

Every time I try to save an Invoice to disk it is asking me to manually select a form.

I have checked in Sales----> Print/Email Invoices ----> Advanced Filters.

I have checked the default selected form. It is selected properly.

This issue happened after a forced update.

We pay a lot of money for these products and I'd prefer it that you don't REMOVE features when you push an update.

If users requested to be able to select a form manually every time they want to save to PDF then it should be an OPTION.

Do you understand how painful you've made it to save 12 invoices in a row? How much of my work day you're wasting?

Re: Send To Disk no longer selecting default form

As indicated on other posts the ability to select a form when using the Save to Disk feature was implemented in  2021.4 based on users requesting this change on the AccountRight Idea Exchange.

We do understand that some users would not prefer to have that selection form option and to use the default form set within Advanced Filters. However, with the AccountRight 2021.4 release it is now a case that selection would be required for that form with the Send to disk feature.

I can see that you have also posted feedback on that idea on the AccountRight Idea Exchange and your feedback has been passed on.

Please don't hesitate to post again if you need help in the future.

I totally agree with Sconnolly - we do pay a lot of money to use these products and I too have the same complaint, it is becoming unbearable to constantly select the form you wish to send to disk.  Surely you are able to rectify this issue.  If some users want to select different forms, then it should be an option for them - I too have to send multiple invoices to disk throughout the entire day and this new update is soooo frustrating.....

It has come to our attention that if you have Setup>>Preferences>>Sales (or Purchases)>>Automatically Save To Disk Sales When They are Recorded enabled you will not be prompted to select the customise form. So this could potentially be used as a workaround without needing to select the required form.

It should also be noted that the browser interface will allow you to view a PDF copy of the invoice. While the selection box does appear on the window to select which form is used this is pre-populated from the Advanced Filters of the Print/Email Invoices setting on the Desktop application. 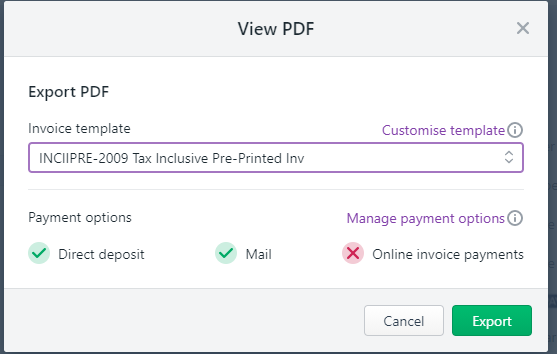 Please don't hesitate to post again if you need help in the future.

If my response has answered your enquiry please click "Accept as Solution" to assist other users find this information.

This is not a solution or workaround. This only works when doing a NEW invoice.

If someone asks me to send them a quote or invoice that has already been recorded it is still prompting me, every single time.

As I have stated multiple times. I have 9 users across my business. I pay you a LOT of money for this product.

This change is slowing our entire work day down. Stop removing features.

All you've done with this post is prove that you could easily add an option in preferences.

I just went to save an Invoice to disc ( not something I do often ) and I see what you mean about having to manually select the type of save instead of it defaulting to the users preference.

I can see why they made it a selectable option as before it was just fixed and you had no choice but as usual they didnt understand that both options ie having a default set and then allowing someone to pick a customised version as well would be the best solution.

Very poor programming and customer relations as they have again decided that their way is the one and only God ordained way to do it.

It shows the piecemeal and uncoordinated programming being done as when you print an invoice you have your default selection and then you can pick another option. So why wasnt at least that copied across

but even it sucks as you have to press multiple buttons to get an Invoice copy and a packing slip WHEN IT WOULD BE MUCH BETTER TO HAVE PREPROGRAMMED PRINT/SAVE/EMAIL BUTTONS.

Then a single button press would do what we wanted

But best of luck getting anything done that will improve MYOB

and really they havnt improved the basic functioality since then

I thought I had better make that very clear

Ie One button press would

Print an Invoice. Print a packing slip. Email a copy of the Invoice to the customer and save a copy to a disc location all with a single button press

NO limitations just because you cant see why

I know you (MYOB) cant see why anyone would possibly want to do all those things and because you cant that is why people are looking for alternatives to MYOB.

This doesn't solve anything. How many users need to report to you that removing features is not okay?

Can you please stop ignoring us?

I'm seeing multiple posts popping up about this now.

What is the feedback from your team on changing this back or adding a TOGGLE option.