And if you’re currently using AccountRight 2016.2, installing this update will fix a few issues that were reported in that release.

The 2016-17 PAYG tax tables for Australia are here

Install this update to ensure all your employees are paid the right amounts from 1 July 2016.

You can install this update before 1 July, but make sure you’ve finished all pay runs for the 2015-16 payroll year before you load the tax tables.

To load the tax tables

To check that the tax tables have loaded

Some things to know if you’re updating from 2016.2

If you’re experiencing the following issues since upgrading to AccountRight 2016.2 (Australia and New Zealand releases), good news - they’re fixed in this release:

Also note that this update is a little different to previous releases:

This update will be available to all AccountRight subscribers in Australia and New Zealand over the next few days.

Guys You need to make it very clear at the very start of your message to not load this update until the last pay run, which for us is 29/6/16.  Otherwise peoples habit is to just click and do the update.

Thanks for the feedback! Note that you can install the update anytime, but the tax tables should only be loaded after the last pay run for June. We did mention this in this post, but I've bolded the note so that it's clearer for all. Thanks again!

OK.  It seemed to me that the Tax Table update was included in the other update, thus doing one would do the other.

So if I apply the update it wont go update my tax tables at the same time. This was my concern.

Hi! I have tried to do the update, however I get a message that there is a previous version already installed and I need to uninstall/remove it.  Last time there was an updated I had to call as I was unable to update.  I was asked to remove and reinstall, which I did but it still wouldnt play nice.  Eventually one of the tech guys installed the PE version (2016.2).

Im not sure what to do this time around. Should I go ahead and uninstall the PE version?

We are the same LDunk, not real keen to uninstall myself .

All the other updates done it all automatically.

Are you using the PC edition of AccountRight 2016.2.0? Then, you don't need to uninstall it if you update when prompted in AccountRight - it will update your existing installation to 2016.2.1.

If you need the tax table update sooner:

I am running 2016.2 SE - and am having exactly the same issue as the above 2 people.  I have gone through the steps of upgrading and am getting an error message "there is a previous version already installed and I need to uninstall/remove it."

Can you please advise what steps to take from here?? At this stage I cannot upgrade my company file.

This appears to be a common problem when MYOB issues point releases of software, in this case 2016.2.1.

I do not understand why MYOB do this, making this release 2016.3 and configuring the installer to recognise it is a new release would have solved all the problems.

My only uneducated answer is that as the data file format is not changing (i.e. no data upgrade required) that do not want to issue new version numbers i.e. 2016.3.

Same issue with my MYOB LDunk, not going to uninstall until MYOB put a version in that will instal the upate automatically.

For this release you will need to uninstall if you're updating from Server Edition 2016.2.0. How to uninstall

If you're using the PC Edition, and have downloaded the "AccountRight PC Installer Patch Only" file from the my.MYOB website (or you update when prompted in your software), you don't need to uninstall.

Has anyone installed the update successfully yet for the SE??

Is the SE version for this going to be updated soon, or will we need to uninstall SE and reinstall the PC Version?

Or can we upload tax tables specifically for the SE version?

I have printed payment summaries and closed my payroll year but I have just tried to update the Tax tables using the setup.. load tax tables but it keeps wanting to reinstall 1 July 2015. I use the online version. First payrun is Monday

have a check on the version by going to File / About.

it should say this - 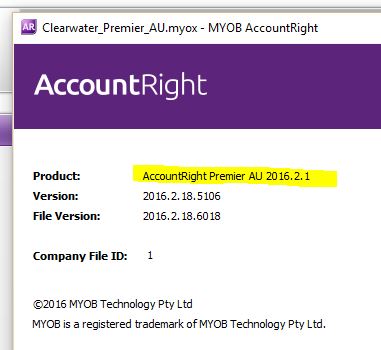 Hi, similarly to sullivanhoran I can't pick up the tax tables for the new year after doing the payroll close - still showing 1/7/15 for my update.

My details show as:

My first payrun is also today.  How do I get these tables up to date and functional?

Does anyone's tax tables say 1/7/2016?? The tax tables I believe are not changing from last year to this year so you should still be able to process payroll. I looked at the ATO's website.

We've had a handful of clients report that their tax tables haven't updated in 2016.2.1, and we're looking into what's causing it.

If your tax tables are not updating, it looks like you'll need to uninstall AccountRight and delete one of the program folders before reinstalling. Please take a look at the instructions for how to do this.

I hope this fixes things for you.

I too am having problems trying to update to Account Right 2016.2.1, MYOB asked me to uninstall a specific file, which doesn't exist .

This update has caused so much confusion and annoyance for everyone andbeen such a long process to have sorted. Our server is not in house so there has been a lot of back and forth with our IT people to get this up and running.

Going forward hoprfully we don't have this problem with another update.

Just completed the Uninstall and Reinstall as per instructions without any issues.

I have done the update on several computers with access to online 2016.2.1, however one computer has lost the'úpgrade button', though we had pressed it and seemd to loop back to normal screen.  I would assume that the upgrade happened, however opening screen says version is 2016.2.0.  I can see the tax table revision date is 01/07/16 and current payroll year is 2017, so hoping all current - then why doesn't the version say 2016.2.1??   In the online version, where exactly do I check the verson number, as I can't see file/about in a drop down?

My feeling is that 2016.2.1 hasn't been installed on that computer. You can check by opening your file, then going to the Help menu and choosing About MYOB AccountRight.

Sounds like the tax tables have been succesfully loaded into the file, which is why the revision date is showing as 01/07/16. The tax tables may have been loaded using another computer. Note that 2016.2.1 files can be used with 2016.2.0.

Hope that solves the mystery!

P.S. If you are using the PC edition on that computer, download the 2016.2.1 "AccountRight PC Installer Patch" file from the my.MYOB website and run it. That'll update your existing installation to AccountRight to 2016.2.1.

Thanks StevenR.   Apoloigies for late reply, I have been away.   My desktop PC does have the 2016.2 SE icon, so I ran the server installer as you suggested, then checked the version in accountright and it still says 2016.2.0.   I also downloaded 2016.2.1.0 and it has put another icon on my computer.  Do I need to keep the SE version or should I just run with the new icon which appears to be the current version.

@RINkel Looks like you now have both the PC Edition and Server Edition of AccountRight installed. You can use either icon to access your company files. If the tax tables are showing a revision date of  01/07/16 then you're OK.

You only need the Server Edition (SE) installed if there are company files on this computer that are accessed from other computers. If other computers on your network don't need to access company files that are on this computer, you can uninstall the Server Edition. Here's more information about the difference between Server and PC editions of AccountRight.

We have purchased a new computer and want to move MYOB from our old computer to the new one. We do not have an existing subscription and as the company has been wound up we will not be resubscribing. We do need to have access to our data however. The only installation media we have is an old version of Accountright V19.5. Is it possible to be able to download 2016.2.1 which is what we have on our old computer.

Welcome to the MYOB Community Forum, I hope you find it a valuable resource.

I've just sent you a forum private message with the download link attached. The message can be found by clicking on your avatar from the top right corner, then click on the mail icon. If you have more questions, please feel free to post again at any time.